Off the Record / Re: STAR TREK

Mine too. This show is genuinely good. It's only been a handful of episodes but I feel like I've seen these characters for years. Great acting and chemistry, solid writing and characterization, and interesting stories. Feels good to be watching some good star treks man.
#92

The Remain campaign had big structural and strategy issues that were less of a problem for Leave. Leave ran a far better campaign.

It does suck but because it's trying to cover up a howling void where a strategy should be, which is the real problem. Voters aren't stupid, they can tell when messaging is not connected to anything.
#93

" The sun never set on the British Empire because even God doesn't trust the English in the dark."

Last post by Sheilbh - June 23, 2022, 06:09:36 PM
Two by elections tonight - lots of expectations management from all sides (although the Lib Dems have moved to "cautiously optimistic" on Tiverton and Honiton).

If the Lib Dems win Tiverton and Honiton it will be the biggest (winning) swing ever in a by election, overturning a majority of about 40%/24,000 votes. The Lib Dems are experts at by elections but this will still be a pretty big scalp.

With Wakefield, it's more of a marginal that Labour are better placed to win back. The Tory majority is only about 3,500 votes or 7.5%. The key here is probably swing. If Labour get a swing of 10% then that's in line with national polls and local elections (and shows Labour winning 85 of 88 marginal seats); if it's more than 10% then it's been good for them.

This gives a bit of a sense of why losing Wakefield is priced in, while Tiverton and Honiton is likely but still a big deal: 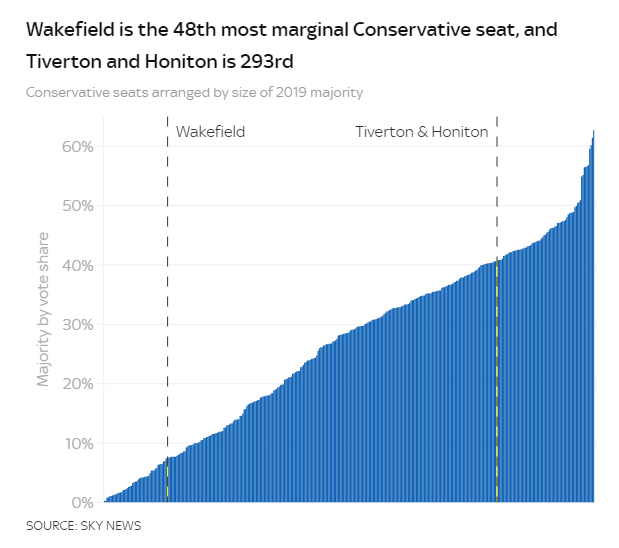 Edit: Hadn't realised this but if Labour win Wakefield, as they should, it'll be the first by election victory for them since 2012

(That's the second longest dry spell for a party after the 11 years after 1997 before the Tories won another by election).
#96

This was at his press conference immediately after they were granted candidate status. No doubt - as every time Macron says something like this - all the French foreign policy people will be explaining what he really meant which may add some clarity. But to me it sounds like he basically thinks the European Political Community is the correct "geopolitical" space for Ukraine and it will, eventually, also include Russia in his theory - which feels like a theory that won't survive contact with reality.

I get explaining it will take a long time but this seems a bit more than that:

Quotelaurence norman
@laurnorman
Macron has just said at the press conference right after Ukraine given candidate status that 1) NATO has said no to Ukraine. and that 2) over time, opening EU accession process to Ukraine is not the right geopolitical response.   These are both highly problematic.
To put in context, his argument was that his political community structure is the right geopolitical response. OK, leaders will discuss that tonight. But that is NOT the NATO position. And it seems extraordinary to diss Ukraine's EU accession prospects minutes after agreeing it.
This is my translation from French. Others may have better version. But was asked by @markuspreiss about his comment 3 years ago that the only response EU had to non-members' predicament was to invite it to become a member, knowing you wouldn't have to deal with consequences...
As part of a long answer, he said, "So therefore, the geopolitical response in the context of the war is indeed to continue to give this perspective. Is it that over time, I think it's the right geopolitical perspective? I tell you frankly, as I did three years ago. No."...
"Because it will take time and because we see a phenomenon of some sort of fatigue of enlargement among the countries that have joined." Again, he's not saying Ukraine will never join or they'll stop the process. And he's pitching a broader argument to have another construct...
ie his European political community idea. But it's still a remarkable thing to say minutes after offering Ukraine candidate status. And it will do nothing to prevent Russia and its social media mob saying this is an unserious process and Ukraine will never join.
Very open to hearing if people think this is a misinterpretation of @EmmanuelMacron comments. I have now listened back several times.
And sorry to harp on this but I see lots of stereotypical tweeting on this. Macron did not say he was opposed to offering candidate status. He said that was the right response now in context of war and without alternative. But not the right "geopolitical" response over time.

Last post by Sheilbh - June 23, 2022, 05:03:30 PM
After Pegasus another spyware company monitoring people's phones - this time an Italian company whose software was found on devices in Italy and Kazakhstan:
https://www.theguardian.com/technology/2022/jun/23/apple-and-android-phones-hacked-by-italian-spyware-says-google
#100

And to replace Northern Ireland we could offer those in Kalingrad a place in the EU if they left Russia, then the EU would 'own' a similar problem to the one that's dogged the UK all these years.
Pages 1 ... 6 7 8 9 10