Quote from: Maladict on December 05, 2022, 02:36:56 PMWhat's the plan for Russia at this point? By now they must realize Europe isn't going to freeze this winter, and the odds are only going to get worse on the battlefield.

Plan is just to hang on I think.

They're taking a mostly defensive posture (except for Bakhmut).  Try to hold on to the territory they have and wait for Europe and the US to get tired of the war.  It's not a terrible strategy - it's what the Taliban or the North Vietnamese used to win.  And maybe if Trump wins in 2024 he'll pull the US out of Europe entirely.

If the EU/US ceased all support for Ukraine I doubt the country would be able to put up the same kind of organized opposition.  I don't think the Russians could pacify the country, but would probably turn it into a European Syria where the country is just devastated.

But how long can both the Russian economy, and Russian military, hold out?  The Russians are really running out of long-range missiles and are pursuing the questionable strategy of using what they have on civilian infrastructure, rather than military targets.  Plus the mobilizations (almost certain to be another round) will take an increasing toll on the economy.
#93

Last post by Syt - December 05, 2022, 03:14:30 PM
Ok, so initially, I could not form a legitimate government, because any combination of more than one party resulted in low legitimacy.

Now, however, I have everyone in government (except marginalized Trade Unions, who have 2.0% clout), and this is the result: 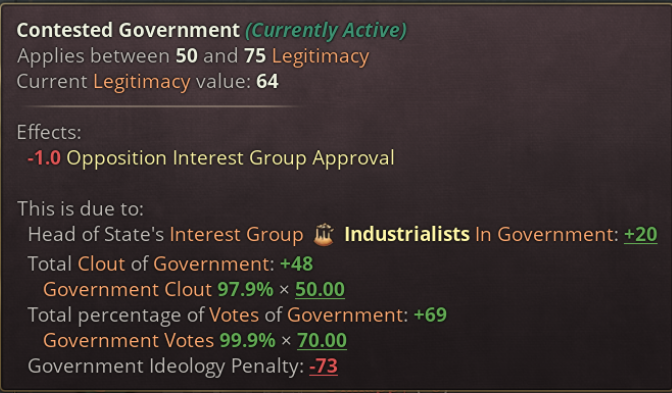 Government is monarchy which gives 10% additional ideology penalty, but you get 20 legitimacy from including the head of government's IG. Census vote gives another 10% penalty, but it also gives a multiplier of 50 and 70 respectively for the level of clout and number of votes in government. So having 97.9% of clout and 99.9% of votes gives almost the full amount which, together with HoG bonus cancels out the ideology penalty.

A few caveats:
Historically, you might see broad "unity" governments at various points in time, though those usually happen in times of crisis. Also, until more extreme laws become available, I guess ideological differences might still be small enough to not be as much of a hindrance as when you have communists and fascists later in the game, and other forms of government/power later give higher (or lower) penalties to those differences.
#94

Quote from: Maladict on December 05, 2022, 02:36:56 PMWhat's the plan for Russia at this point? By now they must realize Europe isn't going to freeze this winter, and the odds are only going to get worse on the battlefield.

Conscript meat roughly holds the line over winter while replacements are trained up. Come spring the Russians have a new Kitchener's Army to resume offensive operations.

The tsarina is already dead.

They'll be up against Argentina next, should be interesting.

edit: well, after the Croatia match

The tsarina is already dead.
#99